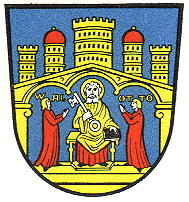 The half-timbered town of Herborn is situated in the German federal state of Hesse, not far from Marburg and Dillenburg. During the 16th and 17th centuries, it developed a reputation for grand Reformed scholarship.
During the Reformation era, Herborn belonged to the county of Nassau-Dillenburg. While Protestant thought crossed the border from Hesse to Herborn early on, William I, Count of Nassau-Dillenburg (also known as William the Rich, 1487-1559) displayed a more reticent response to the Reformation. He did not wish to take a firm stance within the political wrangling in the Empire. But in the 1530s, he started instigating the Reformation in his territory. His son Johann VI (1536-1606) turned to Calvinism thanks to the influence of Dutch Reformers (his brother was William I of Orange), gave refuge to the Crypto-Calvinists exiled from the Electorate of Saxony and planned to set up a Reformed University. He appointed Herborn’s Reformed town pastor Gerhard Eobanus Geldenhauer (1537-1614), known as Noviomagus, as the Superintendent and let him transform church structures along Calvinist lines. Thus he implemented a “Second Reformation” in the county.
When Lutheranism was reintroduced in the Reformed Electoral Palatinate in 1576, Count Johann seized his chance. Once German Calvinism lost its think tank at the University of Heidelberg, Johann gave refuge to its expelled Reformed theologian Caspar Olevian (1536-1587) and commissioned him to set up a “High School” in Herborn. Olevian, who had been one of the composers of the Heidelberg Catechism, succeeded in also drawing Johannes Piscator (1546-1625) to Herborn. Together, they began publishing a prolific series of works, which also benefitted the town’s newly founded ‘Corvinsche Druckerei’ (Corvinus printworks). A special jewel in this crown was the Piscator Bible – the first complete and stand-alone Calvinist German translation of the Bible. German Calvinists used it for centuries, and in the canton of Bern it was actually the state Bible until the end of the 18th century.
Herborn High School attracted more and more students and became one of the most important Calvinist educational institutions in Europe. The breadth of the education it offered is reflected in Johann Heinrich Alsted’s (1588-1638) seven-volume “Encyclopaedia Cursus Philosophici”, which systematically recorded all the fields of knowledge in existence at that time. Johann Amos Comenius (1592-1670), who went on to become the Bishop of the Czech Brethren and father of pedagogy, also studied under Alstedt in Herborn from 1611 to 1613 and is considered the High School’s most famous alumnus.
Herborn High School was closed in 1817, and young scholars from the Duchy of Nassau had to study at alternative universities. After that, though, candidate pastors from the Duchy of Nassau completed their training at the theological seminary that grew out of Herborn High School. Curates in the Protestant Church in Hesse and Nassau undergo their training there to this day.
The High School’s college building is now home to the town’s museum and a restaurant, and a lot of its original library remains at the theological seminary in Herborn Castle. The premises of the Corvinsche Druckerei also still exist. The town’s parish church contains the gravestones of Olevian, Piscator and printer Christoph Corvin. Thus Herborn remains home to this day to a range of European Reformed figureheads from the 16th and 17th centuries.