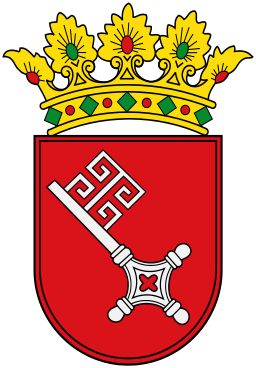 Close the cathedral, the Reformation is coming!

The northern German city of Bremen lies on the banks of the River Weser, some 60 kilometres upstream from its mouth at the North Sea port of Bremerhaven. Together, these two cities make up the small German federal state known as the Free Hanseatic City of Bremen.
The Free Imperial City of Bremen enjoyed an economic boom during the Middle Ages thanks to its membership of the Hanseatic League. As a result, the citizens managed to liberate themselves to a certain extent from the Bremen Diocese. This blossoming self-confidence is reflected in the Roland statue (1404) and City Hall (1409) on the market square, which are both UNESCO World Heritage Sites.
A Reformation movement was established very early on in Bremen. The Augustine monk Heinrich von Zütphen from the Netherlands, who played a key role in spreading the movement, delivered the first Protestant sermon there in November 1522, in the St. Ansgarii Church.
The Catholic Archbishop Christoph von Braunschweig-Wolfenbüttel, a determined opponent of the Reformation, demanded the immediate banishment of the monk. However, the City Council sided with von Zütphen and instead expelled the Dominican Friar from the city’s Saint Catherine’s monastery, who campaigned against Lutheran preaching. This political intervention in church politics cleared the way for the implementation the Reformation.
With the support of the City Council, Bremen’s churches appointed more Protestant preachers during 1524 and 1525, and the city’s parish churches were forbidden from celebrating traditional Latin mass from 1525 on. The ban was extended to include rural parish churches in 1527 and then even Bremen’s monasteries in 1528. As a result, the Dominican monastery became a Latin School, and a little later the Franciscan monastery was turned into a hospital with the agreement of the monks. The diaconal institutions founded at that time to care for the poor and needy still exist to this day.
The period from 1530 to 1532 was marked by social and religious conflict. In 1532, the cathedral chapter closed St. Peter’s Cathedral for 15 years following the imposition of Lutheran worship achieved by the “Revolt of the 104 men” in the face of the Catholic Archbishop’s resistance.
In 1534, the City Council introduced a church order authorised by Luther for Bremen. In 1547, the first Protestant preacher, Albert Rizäus Hardenberg, was installed in the cathedral at the Council’s insistence. However, he ended up being banned from the city when his Reformed leanings emerged. This rattled the Lutherans’ collective identity and provoked escalating conflicts between adherents of the Lutheran and Reformed confessions.
Many influential merchants gradually swayed towards the Reformed camp, and in 1561 control of the city fell into Reformed hands as inter-Protestant conflicts raged.
However, the aristocratic canons of the cathedral remained resolute Lutherans and the resulting conflict between the City Council and the cathedral chapter once again closed the cathedral for worship – this time at the Council’s behest and for 77 years.
The arrival of the Hessian preacher Christoph Pezelius heralded the start of the “second Reformation” in Bremen, spurred on by City Mayor Daniel von Büren. In 1582, he ensured the demolition or removal of all statues from Bremen’s churches and established a moderate Reformed doctrine that was meant to uphold a conciliatory stance towards the Lutherans. The City Council, which had assumed authority over church matters in 1580, introduced the Heidelberg Catechism in Bremen around 1600. As an island of Reformed confession surrounded by Lutheran Lower Saxony, Bremen instated a resolutely Reformed gymnasium academicum in 1610.
Bremen was also invited to the Synod of Dordrecht, where the Reformed Protestants determined the proper interpretation of the Calvinist teaching of predestination in 1618/19. As the Council bound the city’s three delegates to the Augsburg Confession, Bremen represented a unique case on the European church landscape of a Reformed German city.
It was only the invasion by Lutheran troops from Denmark in 1638 that forced the Reformed city to allow its large Lutheran community to conduct Protestant worship again in the cathedral. This led to the parallel existence of both Protestant confessions in Bremen.
Bremen’s Protestant Church has preserved many features from the Reformation era. The church order laid down in 1534 placed special emphasis on congregations’ autonomy, and all Protestant citizens of Bremen have been free to choose which congregation they wish to belong to ever since Mayor Johann Smidt introduced the principle of personal parish in 1860.