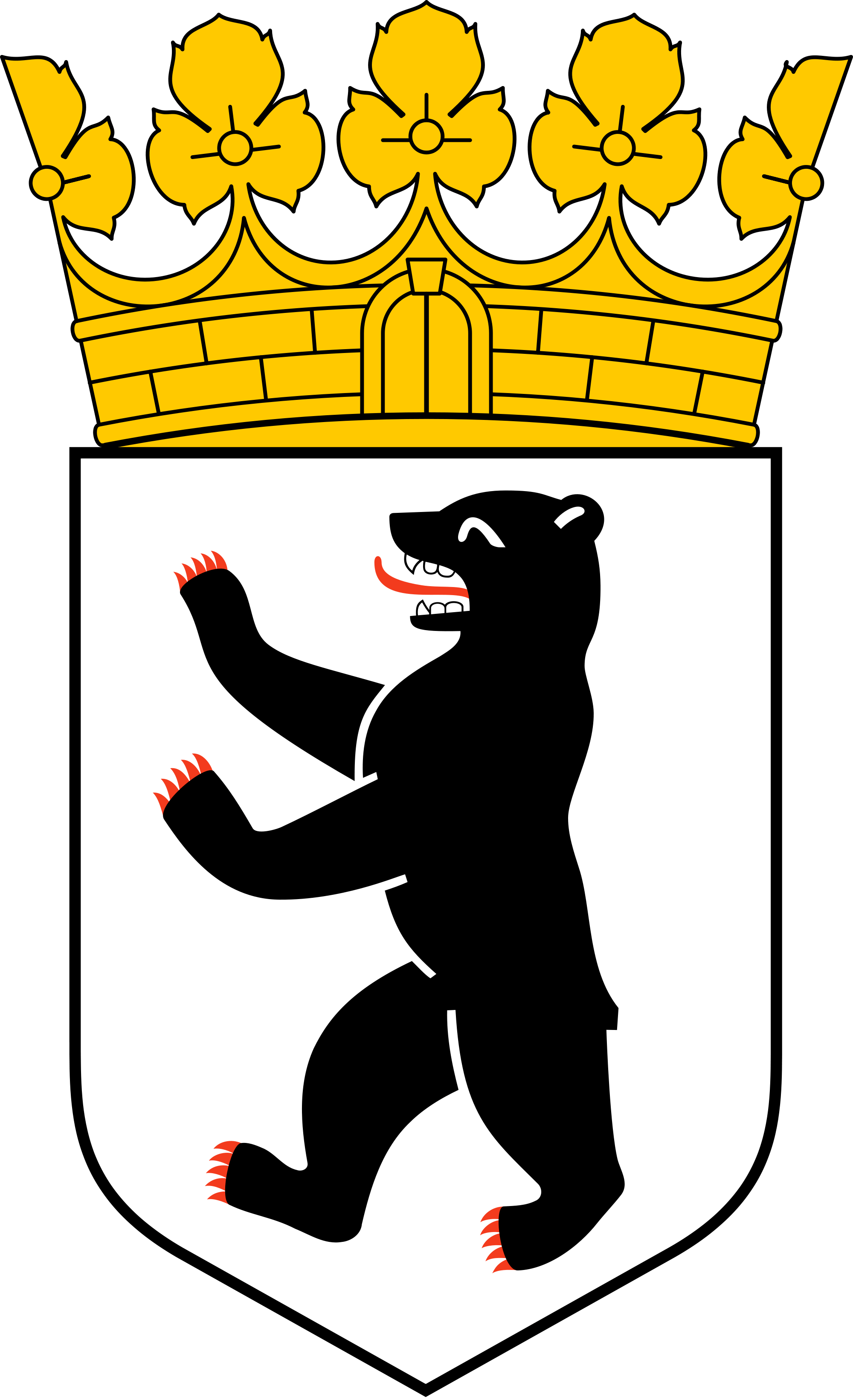 One becomes two and then one again

Berlin is both Germany’s capital city and its own federal state. Its location at the crossroads of medieval trade routes meant that Berlin formed a bridge between East and West from the start. As the form of Germany’s state changed throughout history, the city adopted different roles as a residence city and the capital of Brandenburg, Prussia and the German Empire. The industrial revolution saw Berlin rise to become the largest city between Paris and Moscow. Berlin turned into a key hub of science, culture, fashion and media. Some of these traditions disappeared as a result of National Socialist tyranny and the ravages of war. In 1949, the eastern part of the city was declared the capital city of the German Democratic Republic (GDR). In 1990, Berlin was made the capital of reunified Germany and started to re-establish its place among the predominant cities of Europe.
As the residence city of the Electorate of Brandenburg, Berlin-Cölln was not among the cradles of the Reformation in the Margraviate of Brandenburg. There are few testimonies to the spread of Reformist thought amongst the city’s inhabitants until 1539. The first clear evidence stems from spring of that year, when the citizenry and the magistrate of Berlin sought royal permission to celebrate Holy Communion at Easter by sharing bread and wine.
The citizens’ rather muted interest in the Reformation might in part have been due to the success of the church’s and secular leaders in suppressing it. After all, the ruler’s personal blessing was required for the Reformation to proceed in the Electorate. Elector Joachim II (1505-1571) took the decisive steps in this direction when he came to power in 1535. His decision was influenced by many factors. Although the movement was no longer repressed, for imperial political reasons he initially hesitated in officially instigating the Reformation.
However, All Saints’ Day (1 November) 1539 was set to become a momentous date. In order to prepare everything for this day, Joachim II summoned Reformist theologians to Brandenburg and maintained close contact with the Wittenberg ranks. The reform of the Church was heralded by the first official Reformist sermon held by provost Georg Buchholzer in Berlin Cathedral. This was followed by the first official Protestant Holy Communion, which Brandenburg’s Bishop Matthias von Jagow dispensed to Joachim II and members of the Margraviate’s nobility in St Nicholas’ Church in Spandau on 1 November 1539. This representative gesture on the part of the ruling prince turned Brandenburg, and its still separate cities of Berlin and Spandau at that point, into a land of Lutheran church renewal. In summer 1540, the church order ensued that officially laid the foundation for this process. These three measures ‒ the Protestant sermon, Protestant Holy Communion and the Reformist church order ‒ laid the foundation for the Reformist Regional Church. The establishment of church structures that reflected the “regional ruler’s authority over the church” gave rise to a conservative-style Lutheran regional church.
Although Luther was never to visit Berlin, his teachings heavily influenced the essence of Prussia and the character of Berlin and its inhabitants. A network of Protestant pastors gradually formed in Berlin-Cölln, the school and healthcare systems were evaluated, and the pooling of all church resources into “common coffers” provided a new means for funding the churches and aid for the poor. Very soon, this Lutheran-driven Protestant Christianity gave the city a new religious and cultural hue.
In 1613, Elector Johann Sigismund (1572‒1620), the third successor to Joachim II, converted to the Reformed faith for personal reasons. However, his efforts to implement a wholesale new church order in Brandenburg failed. The vast majority of his subjects opposed this change of confession. Thereafter, the Reformed tradition was restricted to the Elector’s court and a small, elite circle of acquaintances.
The city was effectively split into dual Lutheran/Reformed confessionalism after Elector Frederick William (1620-1688) issued the Edict of Potsdam in 1685 and invited the Huguenots suffering persecution in France to Brandenburg. Of the 20,000 Reformed religious fugitives who responded, only 6,000 settled in Berlin. Their professional efforts as tradesmen, entrepreneurs and financial dealers bolstered the city’s industrial upsurge.
The two confessions’ co-existence was sealed in canonical terms by the Union that King Frederick William simultaneously forged in Potsdam and Berlin on 31 October 1817. Lutheran and Reformed Protestants have enjoyed pulpit and table fellowship since that day.